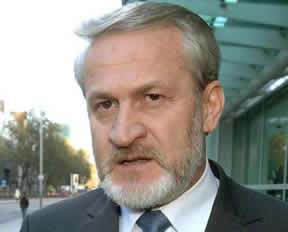 Interviewed by the Agency Caucasus, Ahmet Zakayev, Prime Minister of the Chechen Republic of Ichkeria, said that Russia would not recognize Abkhazia and South Ossetia but it would instead try to annex them.

Zakayev also said that the declaration of the ‘Caucasian Emirate’ was an act of provocation plotted and intended by the Federal Security Service (FSB) of Russia, formerly known as the KGB. The following is the entire script of the interview with Zakayev.

Prime Minister, allow me first and foremost to thank you for kindly agreeing to answer the Agency Caucasus’ questions. We would like to ask your opinion on Kosovo’s independence. How do you view Kosovo’s declaration of unilateral independence? Can the international recognition of Kosovo’s sovereign independence influence Chechnya’s future efforts to gain independence?

The Chechens welcomed the independence of Kosovo, which I also mentioned in the letter I wrote to the Prime Minister Khashim Thachi of Kosovo. The significance of the international recognition of Kosovo’s independence is that for the first time since the United Nations (UN) was established it has broken the vicious circle into which all dependent peoples were drawn due to the right to veto that belongs to the permanent members of the Security Council. Until Kosovo was recognized, it was only through achievement of unanimity in the UN Security Council that a country could be recognized. Does Russia, a country that has the right to veto, ever allow international recognition of the independence of dozens of Muslim nations that it holds under its colonial control? Well, it is difficult to imagine this happening.

What could be the reason for Russia’s refusal to recognize Kosovo’s independence? Is it linked in any way to the situation in the Caucasus?

Russia’s resistance to the recognition of Kosovo’s independence can only be accounted for by its fear for the future of the countries already under its colonial rule. Additionally, Russia would actually enjoy further prolongation of tensions in the Balkans, because tension and wars have always been its most familiar habitats as far as its foreign relations are concerned.

Can Kosovo’s recognition clear the way for the international recognition of South Ossetia and Abkhazia, two ‘de facto’ independent Caucasian countries? Is there any likelihood that Russia will recognize these two republics? Can Russia’s recognition of Abkhazia and South Ossetia cause Chechnya to be recognized as an independent state by the Western countries that support the administration in Tbilisi, capital of Georgia, and that consider these two republics as belonging to the territorial totality of Georgia?

Russia is not seeking the independence of Abkhazia, South Ossetia and connectedly Transnistria; it only seeks to annex them–which has already occurred actually. As long as Moldova and Georgia hope to bring these two republics back into their own fold, there is no point of Russia hurrying to legalize its annexation of them, because this gives the administration in Moscow, capital of Russia, a great advantage of disabling Moldova and Georgia to join the European Union (EU) and the NATO.

Of course, all the unresolved nature of these questions forces the West to wink at the crimes that Russia has committed in Chechnya, because the West has always been sure that if Russia swallowed Chechnya, it would set in relief Abkhazia, South Ossetia and Transnistria, three countries of great strategic importance to the West. Whatever the case happens to be, Kosovo sets a significant example for the unrecognized peoples to take and this makes it bear a direct relevance to our future prospects of recognition as well.

Does your government intend to improve the relations of the Chechen Republic of Ichkeria with the Western countries following the example of Kosovo?

Our government has been consulting the Western politicians who are willing to offer new opportunities to enlarge democracy as well as to guarantee the recognition of the rights of the colonial peoples to self-determination.

Long before Dokka Umarov declared his ‘Caucasian Emirate,’ I received information that the Russian intelligence services were planning a provocation under the working title of ‘Caliphate.’ As we had discussions with the colleagues from the Government as well as from the Parliament, we worked out what the Russians were actually aiming at. Whatever heights do the Russian troops in Chechnya command today, however many children and women it killed in Chechnya, and however many puppet administrations it set up in Chechnya, Russia knew that the political settlement of the Russian-Chechen conflict was not to be accomplished this way. There is no possibility of having a political solution without the participation of the legitimate Chechen Republic administration.

Russia has only two options to guarantee a victory over our Resistance; the first one stipulates the capitulation of Chechnya’s legitimate leadership and its agreement to sign all the conditions demanded by Russia; the second one stipulates the self-destruction of this legitimate leadership–that is to say, it stipulates that distancing of the legitimate Chechen leadership from its legal bases, which date back to the 1990 Declaration of the State Sovereignty of the Chechen Republic of Ingushetia, the 1992 Constitution of the Chechen Republic of Ingushetia, and the 1991 and 1997 elections.

Apparently, it was necessary to work out something more logical than merely to force the Chechens to forgo the ideal of statehood, for which many past generations have struggled as well as suffered, for the sake of a mythical ‘Emirate.’ The Kremlin and its agents also underestimated the Constitution of Chechnya, which protects the national sovereignty against any arbitrariness. And also they hastily left out the parliament of Chechnya from their calculations.

To put it briefly, the parliament prevented the legitimization of the self-destruction of the Chechen statehood. The statements of Dokka Umarov left him deprived of all his legitimate authority to hold any governmental position, and the parliament viewed this as his self-withdrawal from his position as an acting president.

The provocateurs could not succeed in demolishing the constitutional structure, but they caused the ranks of the armed Resistance fighters to experience a definite chaos, which we are working busily to eliminate.

It is noteworthy that the Russian news media did not pay any attention at all to Dokka Umarov’s declaration, except for the news website Newsru.com’s coverage of my comments on the declaration of the ‘Emirate.’ What is more noteworthy is the fact that Dokka Umarov’s video-recorded statements were first delivered to the State Department of the United States (US) and were afterward made available worldwide through Radio ‘Marsho,’ or the Chechen-language service of American ‘Radio Liberty.’ It is also interesting to notice that the Russian side has been stoutly resisting any attempt to draw it into the earnest battles between the supporters and the opponents of the ‘Emirate.’

It later became obvious that later copies of the video recording of the newfangled declaration of the ‘Emirate’ were sent to the governments of all Western countries, and commentaries were avoided to guarantee that nobody should question the ‘legitimacy’ of Dokka Umarov’s initiative. It was not much possible to do so, however. The belated editing of statements by the ‘Emir’ on ‘Kavkaz Center’ was made of necessity to disguise the ‘long ears’ of the FSB that stuck out of this provocation.

Meanwhile, the shameful attempts to conceal the declaration of jihad, a holy war, against the US, Britain and Israel was intended to protect ‘Kavkaz Center’ (the loyal mouthpiece of the Kremlin) against possible sanctions to come from the three mentioned countries.

Can it be said that the Chechen Resistance is suffering from separation? And how do you foresee the future of the Resistance?

Of course, the ‘Emirate’ provocation has dealt a serious blow to our struggle, but it is not fatal by the grace of God. The Chechen Resistance has one prospect only, which is victory without it ever depending on the illness or death of any leader.

Can Putin’s farewell to the Kremlin after the March 2 presidential elections and his replacement by Dmitri Medvedev have implications for Caucus and Chechnya? Do you expect to see a change in Russia’s policies on Caucus?

By the long-standing Russian tradition, any leadership succession, even if it concerned the inheritance of the throne by the son of a tsar, has always meant a change in policies. When Medvedev comes to office, he will be the absolute ruling master of Russia. Without a doubt, Russia will not be able to avoid making changes in its policies on Chechnya in particular and Caucasus in general.

Do you have a message for the Chechen Diaspora before we end our interview?

I would ask the Chechen as well as the Caucasian Diasporas not to feel as if they are simply the spectators of the national struggle for independence, which has engulfed their historic motherland. Actually, I feel that I need not to ask this after all, because the Caucasian Diaspora in Turkey are the grandsons and granddaughters of the people who rejected the occupying regime of the Tsarist Russia when it was formed in Caucasus.

Thank you very much, Prime Minister.